12 - 92 pts in semi 1
Blackbird by Norma John is the winner of the 2017 Uuden Musiikin Kilpailu (UMK), the quest to find a Eurovision entry for Finland.
Norma John are Leena Tirronen en Lasse Piirainen and they wrote the song themselves.
The song has been released on the digital UMK album and as a seperate digital single (Feb 21).

A 1-track promo cds was made for radio, don't know if there's any promo for Kyiv.

A remix of Blackbird was released on July 12. (digital release)

Leena Tirronen ended third in the 2010 X-Factor in Finland and got to release an album Leena Ihmemaassa (Lena in wonderland) and a few singles. None of them made it to the charts and she was soon dropped from her label (Sony). Lasse Piirainen co-wrote some of the songs on her album.
The pianist/keyboardist/producer tinkled the keys in the past for Milana Misic, Johanna Kurkela, Anna Abreu and more.


10 songs were lined up for the Finnish Eurovision selection
They all have been released digitally (iTunes) and are available through Spotify
Capitol Records Promo cd-r's of the UMK 2017 album have been distributed by YLE at the UMK live events. (see coments)
The last time an official CD was released was in 2014. 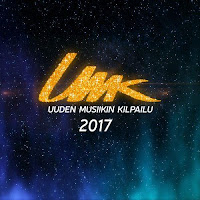