Openings and intervals are an integral part of the Eurovision experience, but most of the time I notice them only when rewatching the events as on the night it’s the time for pooring drinks, totting up votes and topping up the peanut bowls.

These are this years interval acts that have their music released for the public. All are for sale through the digital stores, although not in all territories. And you can Spotify them. I've even made a playlist so you don't have to, scroll to end of this post.

Semi 1 was opened by Monatik (Монатік) who performed his song Spinning. The track was released on May 9 through your favorite digital stores.
The track was originally released in its original version Кружит (Kruzhit, Circles) in 2016 on the album звучит (Zvuchit, Sounds). The album was also released on CD.

Jamala
Jamala gave us a new version of 1944 in the interval of Semi 1. This Symphonic version was released as a digital track. The other song she performed, Заманили (Zamanyly, Lured , seduced),  is a digital single from 2016.
The track was originally released by Jamala with DakhaBrakha (ДахаБраха). DakhaBrakha are a world music quartet from Kyiv.
I think it was quite rude not to credit DakhaBrakha on the night, as it’s their joint version you hear at the interval. 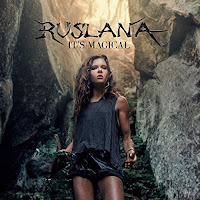 Anyway, it was the best Jamala performance of the contest and the song has been released in two versions (digital).
Jamala’s third song was I Believe In U, which was performed in the Final Interval. This was released as a digital single on May 14.

Ruslana
Ruslana, the winner of the 2004 contest, also appeared in the Final. She performed her new song It’s Magical.
The song has been released on May 14 in its English and Ukrainian (Я Люблю) versions.
In Kyiv Ruslana performed a bi-lingual version

Onuka
By far my favorite bonus act was Onuka. They performed a medley of songs with the National Academic Orchestra of Folk Instruments of Ukraine.
The songs included Other and Vidlik (the one with the words in the background) both to be found on the 2016 EP Vidlik. The Vidlik EP was released digitally but also as a white vinyl 12”inch.
First part Misto / Around Me and last part Untitled (where we begin) can be be found (as seperate tracks) on their 2014 album Onuka, which is well worth checking out too.
I hadn't heard of Onuka before the contest, but I'll be checking them out if there's new work. They're all I wanted Fusedmarc to be (and I really tried...)
Vidlik could benefit from a stunning remix though, as the original studio version may be a bit too hardcore for the dancefloor. 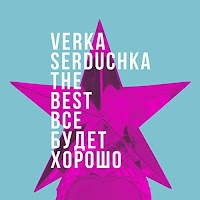 Verka Serduchka
There was no escaping Verka Serduchka and her Mamma, and rightfully so. But business is business and the digital compilation The Best Of Verka Serduchka was released to coincide with the contest.
This digital collection includes a 2015 mix of the 2007 entry Dancing Lasha Tumbai. It’s very similar to some of the old versions but with a few new sounds here and there.

Posted by Eurocovers at 9:22 AM